Elaine Enright, founder and driving force behind Yellow Door Productions and principal teacher at Yellow Door Expressive Arts, has many years experience in a variety of diverse projects and performances, as well as teaching accreditation and certification with the ISTD -Imperial Society Teachers of Dance in Modern Theatre Dance, Imperial Ballet and Cecchetti Ballet. 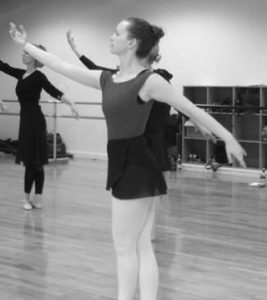 Elaine studied ballet, contemporary, jazz, modern, choreography, performance skills, anatomy, kinesiology, health and safety and dance history before graduating in 2000 and completing her professional exams in ballet and modern, as well as the Performance Dance Certificate from the Firkin Crance Dance Centre in Cork.  Is currently continuing for dance teaching training in Dublin and the UK with her Diploma in Dance Education and is a member of the Imperial Society Teachers of Dance.

Elaine is a former member of Cork City Ballet and appeared in Excerpts of the Nutcracker in the Firkin Crane and Swan Lake which toured the Isle of Man with members of Russion Ballet, Perm State, and Monica Loughman. She sat her first professional exams at 14 and further went on to study in London and Barcelona.

Professionally, Elaine has sung in Bunratty Castle as one of the banquet singers and as a “storyteller” of the history at the banquets. She has won the All-Ireland in choral singing and can play piano, guitar, and the cello, which she continues to study. Her first track ‘four days later’ is to be found on Amnesty International’s album Unchained Melodies.